He vowed to fight COVID restrictions — though many have already been lifted.

Republican Sen. Ted Cruz rolled up to the Capitol rotunda on Thursday in a honking semi-truck, the lead vehicle of a convoy that for the past five days has encircled the D.C. Beltway in protest of COVID-19 restrictions.

The Texas senator, fully vaccinated, rode in “People’s Convoy” co-organizer Mike Landis’s truck from Hagerstown, Maryland, before stepping out for a press conference in support of the truckers — many of whom traveled from California in late February.

Cruz thanked the truckers while standing alongside Landis and another co-organizer, Brian Brase.

The “People’s Convoy” met with Cruz and Republican Sen. Ron Johnson, R-Wis., on Tuesday for a roundtable discussion at the Capitol and later with Republican members of the House Transportation Committee.

The truckers said they would continue their protest until they had sat down with more members of Congress and had their demands met. Those demands include rolling back the national state of emergency designation as well as any existing vaccine mandates. The truckers are also calling for congressional hearings on the origins of the pandemic along with an investigation into state and federal COVID responses.

Across the country, however, most COVID restrictions have already been lifted. Some states, like Florida, have maintained lax COVID mandates throughout the pandemic.

If Republicans gain control of Congress next year, Cruz, who has flirted with the idea of a 2024 run as the GOP presidential nominee, said he’d work for legislation to support the truckers’ demands.

The senator took a swipe at Democrats and some Republican colleagues in the Senate over failed votes to end COVID restrictions like mandates for active-duty military, federal civilian employees, federal contractors and private-sector mandates through OSHA.

“I’m fighting to vote on it again… This shouldn’t be a partisan issue,” Cruz said. “This should be ‘leave me the hell alone.'”

Cruz used the press conference to touch on a number of hot-button conservative issues, including mandating voter ID.

“It is insane that you have the left and corporate media that tell you it’s wrong to ask for an ID to vote. That voter ID is a horrible, racist idea, which is nonsense. But at the same time, they demand, ‘show me your papers to lunch.’ That’s idiotic. That’s none of their damn business.”

A crowd member yelled at Cruz during the event, “You should run for president,” to which the senator responded: “Thank you.” 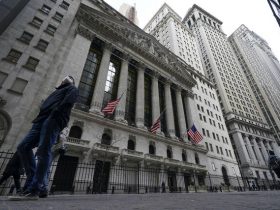