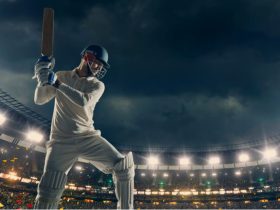 10 Key tips for betting on cricket

The Indian Premier League is a popular cricket tournament in India. It is organized by the Board of Control for Cricket in India (BCCI). The competition is contested by domestic teams representing various cities in India. The tournament features four initial ‘group’ stages followed by a ‘knockout’ stage. The knockout stage culminates with the championship match at the end at which the title of the Indian Premier League is awarded to the team that wins the tournament. The tournament is broadcast in India on several national television channels and is among the most-watched sporting events in the world. Everyone in India is waiting for ipl next match schedule. In this post, we will look at the Top 10 highest scores made by teams in IPL history.

The match was played in April 2013. Batting first RCB made 263 runs for the loss of 5 wickets in 20 overs. Chris Gayle played a superb inning of 175 runs from 66 balls. This is the highest score by any team in IPL history. In reply, Pune could only make 133 runs and lost the match by 130 runs. Bangalore bowlers Rampal, Unadkat, and Gayle took two wickets each.

This match was played in Bengaluru on May 2016. RCB made 248 for the loss of 3 wickets in their 20 overs. Both Captain Virat Kohli and AB De Villers scored centuries in the match. Kohli made 109 runs from 55 balls while De Villiers scored 129 runs from 52 balls. Gujrat Lions were bundled out for 104 runs giving RCB a big win of 144 runs. Bangalore bowlers Jordan took 4 wickets while Chahal took 3 wickets respectively.

CSK batting first made a total of 246 runs for the loss of 5 wickets in Chennai on April 2010. Murli Vijay scored 127 runs from 56 balls. Albie Morkel also contributed with a quick-fire 62 runs from 34 balls. Rajasthan played well and made 223 runs. Chennai bowlers Morkel and Bollinger took two wickets each. Chennai won the match by 23 runs.

KKR posted a total of 245 runs for the loss of 6 wickets in their 20 overs. The match was played on May 2018. Sunil Narine scored 75 runs from 36 balls while Dinesh Karthik made 50 from 23 balls. Kolkata bowlers Russell took 3 wickets while Krishna took two crucial wickets to help their team win. Punjab scored 214 runs in 20 overs and lost the match by 31 runs.

CSK batting first made a score of 240 runs from the loss of 5 wickets in Mohali on April 2008. Michael Hussey scored an unbeaten 116 runs from 54 balls. Chennai bowlers Gony, Muralitharan, Amarnath, and Joginder Sharma took one wicket each. Punjab scored 207 runs and lost the match by 33 runs.

In May 2015, RCB posted a total of 235 runs for the loss of 1 wicket. AB De Villiers scored an unbeaten 133 runs from 59 balls. He was involved in a partnership of 215 runs with Captain Virat Kohli who scored unbeaten 82 runs from 50 balls. Bangalore bowlers Chahal and Patel took two wickets each. Mumbai could only score 196 runs and lost the match by 39 runs.

The beautiful ground of Dharamshala in Himachal Pradesh witnessed a high-scoring match where Kings XI scored 232 runs for the loss of 2 wickets in 2011. Adam Gilchrist scored a century and made 106 runs from 55 balls. Shaun Marsh also made an unbeaten 79 runs from 49 balls. Bangalore was bundled out for a score of 121 runs. Punjab bowler Piyush Chawla took 4 wickets while Ryan Harris took three wickets. Punjab won the match by 111 runs.

Daredevils posted a total of 231 runs for the loss of 4 wickets in 2011. Openers David Warner and Virender Sehwag were involved in an opening stand of 146 runs. Warner scored 77 runs from 48 balls while Sehwag also scored 77 runs from 35 balls. Ajit Agarkar took two wickets for Delhi while others bowlers took the rest of the wickets. Punjab managed 202 runs in 20 overs and lost the match by 29 runs.

The Indian T20 Cricket Premier League (T20) has been a highly competitive league since its inception in 2008. The league is broadcasted in India on Star Sports, which has helped it become one of the most followed sports leagues in the country. The league has also drawn a lot of attention from overseas, with many countries, such as England, following the league. The T20 Cricket Premier League is the highest-scoring league in the world, with the highest-ever score being over 200. With such a high-scoring league, the league has seen many big names come in, such as the likes of Virat Kohli, Chris Gayle, and AB de Villiers. These players have contributed a lot to the tournament.

With the next season of IPL coming soon we expect many high-scoring matches in the future.

Know all about cricket news and updates at CBTF news.

Get the fastest cricket news update at https://cbtfspeednews.com/.

Know all about cricket betting and updates at CBTF betting.

Get the updated expert betting tips at https://cricketbettingtipsfree.com/

Checkout our videos to get the latest updates about cricket and betting tips, and casino

tips to win big with expert opinions at https://www.cbtfmytube.com/.

10 Key tips for betting on cricket